What is CBD isolate?

Cannabidiol (CBD) isolate is hemp-industry nomenclature for crystalline cannabidiol. It is cannabidiol in its purest form and its appearance (when pure) is that of an off-white crystalline solid. It is referred to as CBD isolate because CBD is one component of a multi-component extract that has been ‘isolated’ from all the others.

How is it made?

There are several steps required to take the cannabis biomass ‘from crop to crystal’. These steps will vary depending on the user’s preferred extraction method, but typically the steps are as follows:

If you also require assistance with step 6, the filtration, washing and drying of CBD isolate, we recommend our friends at Alconbury Weston Ltd (AWL) 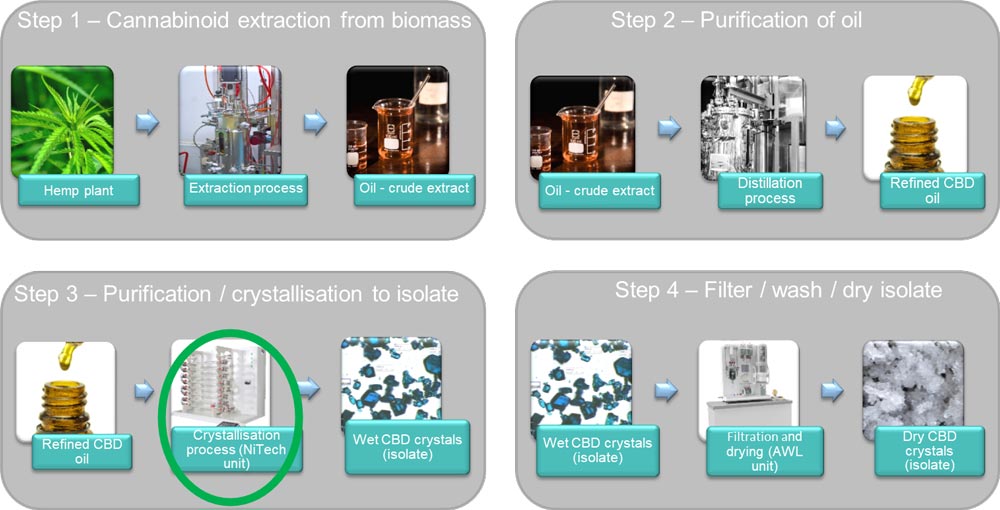 How does CBD crystallization work?

To understand this, we first have to explain crystallization. At its base level, crystallization is the isolation of a solute from a solvent by causing it to form a solid. This is achieved by manipulating the solute’s solubility in the solvent. The most common way to achieve this is through the manipulation of temperature. This is referred to as a cooling crystallization and this is what is used to crystallize CBD isolate from CBD distillate.

In the case of CBD isolate, the approach is the same. CBD present in CBD distillate, is diluted with hydrocarbon solvent (typically pentane or heptane) and then cooled so that the CBD molecules crystallize as CBD isolate crystals.

What is seeded cooling crystallization?

Below is an illustration of a solubility diagram (Fig. 1) which demonstrates the important relationship between CBD concentration (y axis) and temperature (x axis), and the affect of temperate on CBD phase-behaviour. 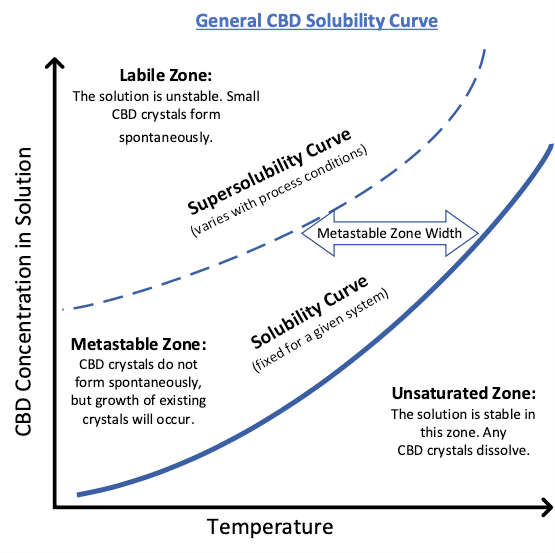 Fig 1: Example solubility curve for CBD in a solvent system

There are three zones:

In a NiTech® continuous crystallizer, the combination of optimal mixing, enhanced heat transfer and the addition of seeds, the operator can keep the CBD concentration in solution inside the metastable zone throughout the crystallization process (see Fig 2.). 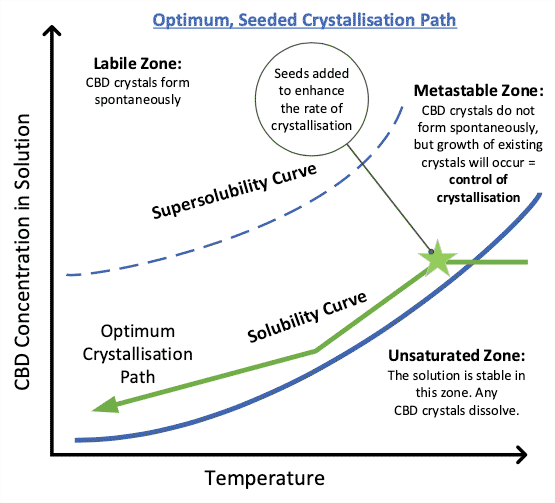 The enhanced control of crystallization pathway in a NiTech® continuous crystallizer results in a high CBD isolate yield (close to the theoretical maximum) and a high-purity product with a uniform crystal size for simpler downstream processing.

What is the difference between precipitation and crystallization?

Although the phase of the product is the same (i.e. a solid), the characteristic of the product and the mechanism by which it is formed is different between the two processes.

Precipitation occurs when a solute in a solvent becomes supersaturated to such an extent that it nucleates and spontaneously comes out of solution.

Precipitation is rapid and forms a large quantity of small particles, as rate of formation of new solids greatly exceeds the rate of crystal growth. Also, due to the speed of precipitation, other components become entrapped in the precipitate, resulting in a lower purity material; these can include the solvent as well as other components present in the solvent system at the time.

In the case of CBD, this can mean THC, pesticides, solvent and other cannabinoids becoming entrapped in the CBD crystals, requiring resource-intensive recrystallization operations to achieve the required purity.

In addition to a greater number of impurities, the small particle size results in:

For these reasons, although quick and easy, precipitation is not an effective or desirable means of isolating a compound from a solution due to poor process performance.

Crystallization occurs when the solute dissolved in a solvent is supersaturated (but not precipitating spontaneously). An external stimulus, e.g. the presence of seeds, is used to initiate nucleation in a controlled manner. Crystallization is the controlled growth of crystals, often from seed crystals. The seed crystals act as de facto catalysts, which lower the energy barrier of crystallization: it is easier for solute to crystallise on an existing crystal surface than to form its own new solid phase, at relatively levels of low supersaturation.

Controlled crystallization in a COBC is gradual and forms large, uniform particles with high purity and yields and makes downstream processing simpler and more effective.

Crystallization is the desired method for isolating a compound from a system.

What happens when crash cooling CBD?

CBD isolate is often produced using crash cooling (this is precipitation). As demonstrated in Fig 3: 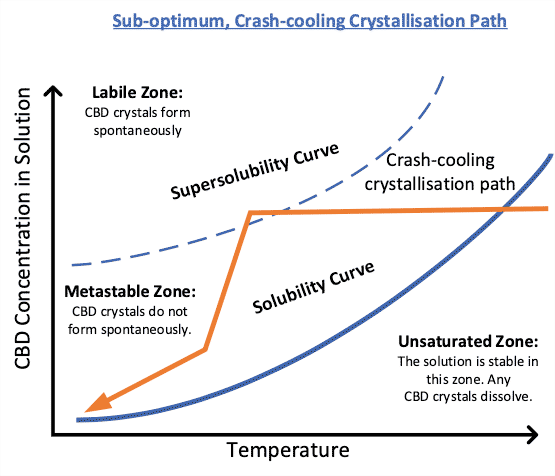 This method is fast and simple but is not an efficient means of crystallizing CBD isolate as the precipitate forms rapidly and entraps other components. These may include THC, pesticides, solvent, and or any other components that were present in the original distillate. In addition, when CBD isolate is formed via precipitation, the particle size is small and results in the material becoming more compacted and harder to filter effectively, as well as caking on the side of the reactor/stirrer. Due to the small particle size, material is also lost during filtration and washing.

Typically, CBD isolate that has been crash cooled will require at least one recrystallisation (which is at least 2 steps in total) to achieve the desired CBD isolate purity, thus complicating downstream processing and reducing CBD isolate yields and throughputs.

Can you perform seeded, cooling crystallization in batch stirred tanks?

It is possible to attempt seeded, cooling crystallization in batch stirred tanks; like the operation of a NiTech® continuous crystallizer. B/R Instrument’s blog provides a comprehensive explanation of this process: how to crystallize cbd 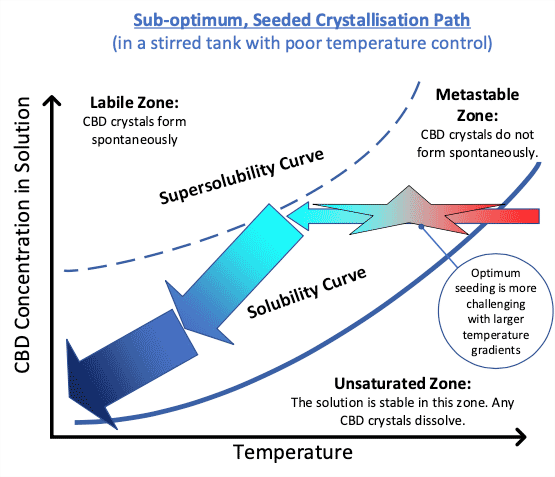 Fig 4: Seeded, cooling crystallization in large batch stirred tanks (Note: wider arrows are used to illustrate the temperature gradients within the fluid inside a large stirred tank caused by poor mass and heat transfer properties of this equipment)

Batch stirred tanks are severely limited by heat and mass transfer (i.e. the ability to heat or cool their contents and the ability to mix effectively), particularly at larger scales, leading to significant batch to batch variation, reduced CBD isolate yield and purity.

At larger scales, there is proportionally lower surface area available to transfer heat to the contents of the vessel. This is known as ‘decreasing surface area to volume ratio’. This means that it takes longer to heat or cool the contents of the reactor, making it impossible to respond quickly to dynamic processes, such as crystallization, to keep the vessel’s contents at the correct temperature.

At larger scales, mixing is less efficient and more energy intensive. Non-uniform mixing causes temperature and concentration gradients to form in the vessel, for example, areas close to the walls of the vessel will be colder than at the centre of the vessel. This leads to areas where, simultaneously within the same vessel, material is both spontaneously precipitating and re-dissolving.

The result is a less severe form of crash cooling, but still far from ideal: CBD isolate precipitates out of solution and other components become entrapped in the CBD isolate crystals. These may include THC, pesticides, solvent, and/or any other components that were present in the original CBD distillate.

We hope you have found this page useful. We have explained the science behind crystallization and how it applies to CBD isolate production. We also explained how CBD isolate manufacturers can overcome the limitations of established, batch-based crystallization equipment through the application of NiTech’s proprietary continuous crystallizer.

We would be delighted to speak to you if you are interested to learn more about how NiTech® can help your organisation take advantage of the benefits of continuous CBD isolate crystallization.

Any cookies that may not be particularly necessary for the website to function and is used specifically to collect user personal data via analytics, ads, other embedded contents are termed as non-necessary cookies. It is mandatory to procure user consent prior to running these cookies on your website.